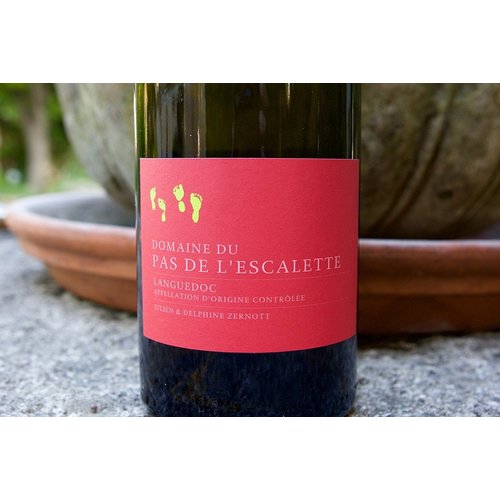 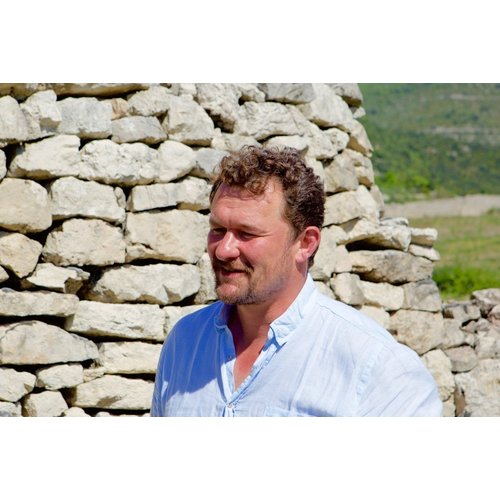 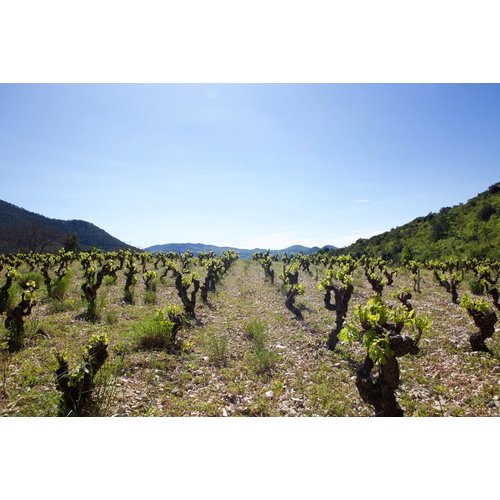 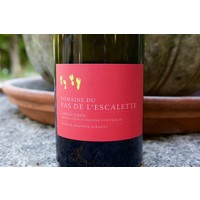 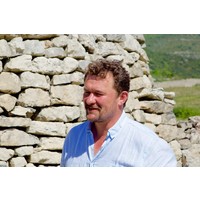 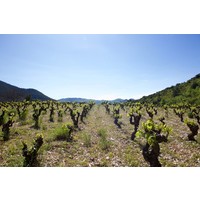 From the moment the Petit Pas concept was created it was intended to be the charmer and not taken so seriously—hence the full color pinkish red label with neon green footprints. They start bottling it at the end of winter to make sure it’s ready at the beginning of a new growing season after everyone has hibernated with an overload of heavy reds. It’s also perfect for summer because it’s a red wine that doesn’t feel heavy under the summer sun. The wine bursts with fresh red and crunchy fruits and fresh, bright acidity.

To insure the pleasure meter remains as high as possible for early consumption as little as possible is done from the moment the grapes are harvested all the way through the short aging process. Once this multi-parcel blend of more or less 40% Grenache, 40% Syrah and 20% Carignan grapes are picked they’re sorted for quality and put into large oak and cement tanks with about 40-50% of the stems still intact; all of the stems from the Syrah are used. During its three week fermentation there are no forced extraction, only a gentle pushdown of the cap to keep it healthy, which is often called an “infusion” method.

After five months in large upright wooden tanks and cement vats (two aging vessels employed preserve the wine’s youthful energy and tension) it’s prepared for bottling with a light filtration and its first and only addition of sulfites—no more than 30mg/l (30 parts per million) of total SO2.

Natives of northern France, Julien Zernott and his wife, Delphine Rousseau, wanted less intense winters and brutally hot summers so they headed south to fulfill their life dream of having vineyards and making wine. Before establishing Pas de l’Escalette, Julien went to wine school in Dijon and capped his work experience with five years in the Loire Valley in the Menetou-Salon cellar, Domaine Henry Pellé. Together Julien and Delphine craft some of the most precise and unexpectedly elegant, organic and biodynamically farmed wines in the Languedoc.

Delphine was working in the south and she met Julien when he was working at Henry Pelle. They had little money so they had to go somewhere where they could afford to start something. Through the years of commuting from the Loire Valley to the Languedoc (where Delphine lived) they passed through through the Pégairolles Valley, and they knew that was the place. They found eight hectares of vines for sale in 2003, bought them and five years later they quit their jobs and went all in on their life project.

The philosophy at Escalette is simply to focus on farming their vineyards as naturally as possible using organic and biodynamic methods, and do as little as possible in the cellar, save for a severe triage when the grapes arrive and precision with their winemaking. They use a minimal amount of sulfites in their wines (no more than 30mg/l, or 30 parts per million total in their reds and a touch more for the whites) and allow them to finish both fermentations without the help of enological products. Sulfites are employed only at the time of bottling so the wine has time to define its personality during its aging process without the abrupt redirection sulfites can impose during this time.

They eschew the use of new oak and use large older wood barrels and tanks to help sculpt their wines grown on limestone and clay soils; they use a range of wood vessels from 500 liter barrels, 20 hectoliter foudre and 40 hectoliter vertical wooden tanks. In 2018 also they added cement vats to the mix with the intention to further protect the high-toned fruit qualities that their cool climate yields—a stark contrast to the majority of wines grown in the Languedoc, which are often dense, sun-soaked reds and usually uninspiring whites.

The focal red grapes at their estate are Grenache, Syrah, Carignan, Cinsault and a tiny proportion of Mourvedre, a grape that is more commonly grown in the hotter areas of the south of France due to its need for a long growing season. (In fact, the only Mourvedre on their property was mistakenly sold to them as Cinsault for one of their new vineyard, Les Frieys. But they liked the result of its contribution to the final wine and decided to keep it.) The whites are principally Carignan Blanc, Terret Bourret (an acid beast of a white grape and the backbone of their minerally white Clapas wine) and Grenache Blanc. The principal grapes they use have a natural affinity to demonstrate bright fruit qualities when grown in cooler climates and are fantastic transmitters of terroir specificity—all defining features of the Escalette style.

Delphine and Julien maintain more than twenty hectares of vineyards on their thirty-four hectares of land. The age of their vines runs from newly planted to more than eighty years old. All of their new plantings are massale selections and the vines are head trained (also called gobelet).