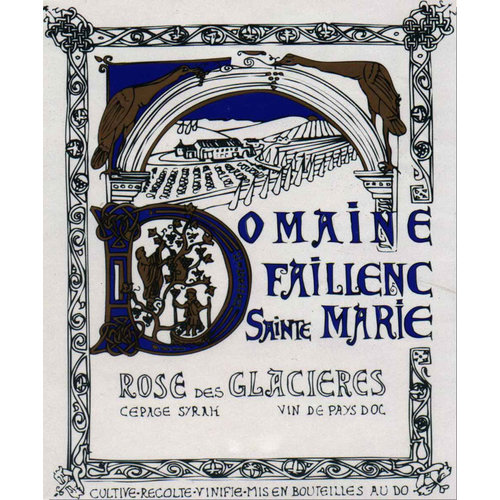 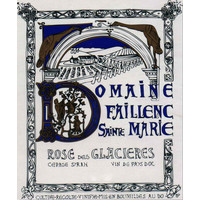 The rosé is made via the saignée method. The grapes, in this case 100% Syrah, go into a tank for a short period of time, usually overnight. After this short maceration period, the juice “bled” off has absorbed some color from the skins, but does not carry the dark purple hue that Syrah can produce. The fermentation is long and slow at controlled temperatures. The Giberts have traditionally left a trace of residual sugar in this rosé, believing that it complements the fruit; but, beginning with the 2011 vintage, the wine will be vinified “dry” to emphasize the true terroir of this very special micro-climate.

About the winery, from the importer:

"Remains of a Roman winery have been found at the site of the Domaine Faillenc Sainte Marie, a testament to the ancient tradition of winegrowing at that location. The domaine, in its present form, was founded during the reign of Louis XIV by an officer returning from service on the Indian subcontinent. Situated just outside of the tiny village of Douzens a mere 12 kilometers east of the ancient walled city of Carcassonne, Faillenc Sainte Marie has recovered its past allure under the careful guidance of the energetic Gibert family and now produces an exciting range of red, white, and rose wines.

I had the good fortune of making the acquaintance of this delightful family when I drank a bottle of their wine while dining with Olivier Jullien (Mas Jullien) at Mimosa, a restaurant of exceedingly fine quality and taste located in Saint Guiraud, a little town in the Languedoc about an hour or so distant from the Faillenc and the Corbieres district. I barely waited for dinner to conclude before calling the Giberts to set up an appointment the following morning. We have been happily working together every year since 1991, the first vintage that we purchased.

Faillenc Sainte Marie is a small property, with only eight hectares of vineyards stubbornly clinging to the rocky foothills of Mont Alaric. The vineyards are buffeted by the northerwesterly Tramontane wind which blows over Alaric and by the southerly Autan breezes coming off the nearby Mediterranean, creating an extremely dry climate. Syrah, Grenache Noir, and Cinsault are the red grape varieties raised here. A small vineyard (1 hectare) is devoted to white grapes: Roussanne, Macabeu, Bourboulenc and Clairette. The terroir is composed of inhospitable, rocky limestone terraces. Only vines, olive trees and some scraggly brush survive under these harsh conditions. As a result, yields are naturally low. The grapes are strongly marked by their environment and this powerful character shows through in the wines. The charming, quirky personality, sense of humor and creativity of Dominique Gibert, as well as the sensitive and diligent vineyard work of his wife, Marie-Therese Gibert, also mark these wines, both in their style and in their names and labels (all designed by Dominique who is a practicing architect as well as vigneron).

Jean-Baptiste Gibert, son of Dominique and Marie-Therese, has now taken command of the domaine and has taken the steps necessary to have the vineyards certified organic. He has also expanded the estate and will increase the number of wines produced at Faillenc."