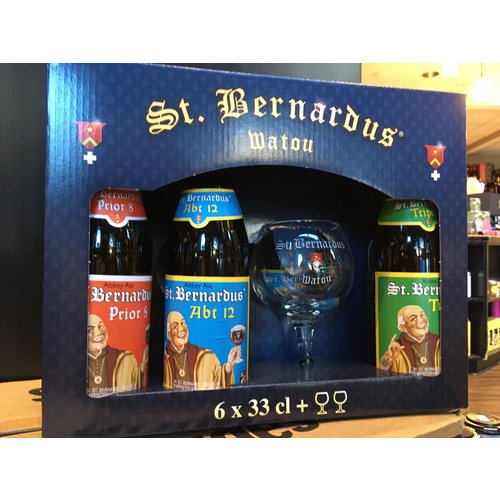 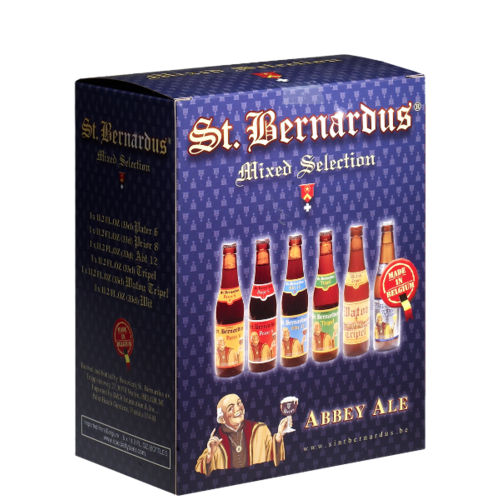 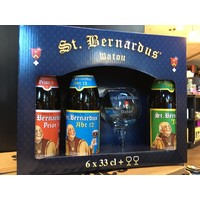 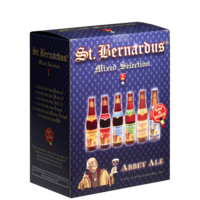 Comes with a gift glass!

Top fermented and bottle conditioned, the brew boasts aromas of caramel, malt, cherries, bread, and clove. Taste follows the nose and also includes plum and fig with malt and spice balanced by notes of brown sugar and darker fruits.

The mouthfeel is medium bodied and smooth with an active carbonation and a 6.7% ABV. The finish is long, dry and slightly bitter.

St. Bernardus Prior 8 is an abbey style dubbel that pours a dark brown color with red highlights and a frothy beige head.

The mouthfeel is medium bodied and smooth with an active carbonation and a warming 8.0% ABV. The finish is long and dry, touched with fruit and a slight hop bitterness.

St. Bernardus Abt 12 is an award winning quadrupel that pours a hazy brown with a frothy beige head and expressive carbonation.

The mouthfeel is soft, smooth and medium bodied. The finish is dry, warm and slightly bitter.

St. Bernardus Tripel is an abbey style tripel that pours a golden color with a small white head and expressive carbonation.

Top fermented and bottle conditioned, the brew boasts aromas of citrus, clove, yeast and bread, candy sugar, banana and peach. Taste follows the nose and opens sweet with notes of mango, orange and lemon-zest followed by fruit and balancing notes of spice and hop bitterness.

The mouthfeel is light to medium bodied with an 8.0% ABV present but not overpowering; the finish is long, slightly bitter, warming and dry.

St. Bernardus Watou Tripel is a traditional abbey ale brewed in the classic "Triple" style of Belgium's Trappist Monks. First brewed in 1998 for the French market, it was so well received that it earned a place in the regular portfolio. This golden pale ale is mellow-sweet with lightly perfumed aromas and some spicy yeast notes. Rich and fruity with a soft mouth feel. (7.0% ABV)

It appears a very pale, hazy straw yellow, with a dense, white head. Aroma is wheaty, with apple-like tartness; herbal-spicy notes of coriander, white pepper and orange peel are complemented by a light, honey-like sweetness.

Refreshing, tart, and crisp; light-bodied and easy to drink --just what a Belgian Witbier should be! ABV 5.5%.

The St. Bernardus Brewery was founded in 1946 by Evarist Deconinck. When the Trappist monks of the St. Sixtus Monastery in Westvleteren, Belgium decided that brewing and promotional efforts had become a serious distraction from religious and contemplative activities, they granted Deconinck a license to brew and distribute Trappistine beers based on the monastery's recipe.

That arrangement continued for decades, but in 1992, when it was decreed that only beers brewed within the walls of a monastery under direct control of the monks could be called Trappist beers, St. Bernardus launched its own brand of abbey beers to huge success.